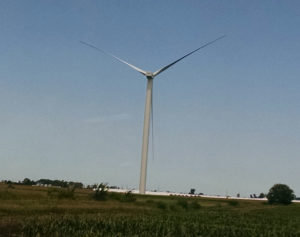 A company that makes wind blades in central Iowa will begin manufacturing bus bodies as well, adding hundreds of jobs.

“Fortunately, for Newton, TPI decided to open a second facility. They’ll be leasing about 100,000 square feet at the former Maytag Plant Two,” Liebl says. The supply agreement requires TPI to provide Proterra with up to 3,350 bus bodies over a five-year period. The Newton bus manufacturing operation is expected to be up and running in the first half of next year with 75-to-100 employees.

“Eventually, the plan calls for three-year employment numbers that will exceed 350,” Liebl says. T-P-I currently employs nearly 1,100 people in Newton at the plant that makes wind blades. Liebl says the bus bodies will be taken by semi to Proterra factories in South Carolina and California to be finished out. Proterra designs and manufactures battery-electric vehicles.