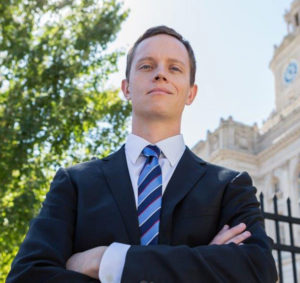 “The state auditor is supposed to be Iowa’s taxpayer watchdog…and I’m asking you for your support for state auditor because it’s time to wake up the watchdog,” Sand said in the video.

Sand, in the recorded campaign announcement, said the state of Iowa is “awash in red ink” and using emergency savings to cover “ordinary expenses.”

“We’ve got a massive hole in the state budget right now, but the current auditor said that it’s in great shape,” Sand said.

Sand was the lead state attorney who prosecuted a former Multi-State Lottery Association employee who rigged drawings in five states. Sand, who is 35 years old, has worked in the Iowa Attorney General’s office since 2010. Sand is a graduate of Brown University and the University of Iowa Law School. He grew up in Decorah.

“I was born and raised in small-town Iowa,” Sand said in his campaign video. “My first job was catching chickens and I’ll never forget the lesson that my parents taught me about financial responsibility. They loaned me money to buy a new bike and I couldn’t stand paying it off. It taught we to avoid debt.”

The current state auditor was appointed to the job in 2013. Mosiman won a four-year term in 2014 and has been raising money for her 2018 reelection campaign.