You are here: Home / News / Hiring HR officer for legislature on hold in Senate, proceeding in House (AUDIO) 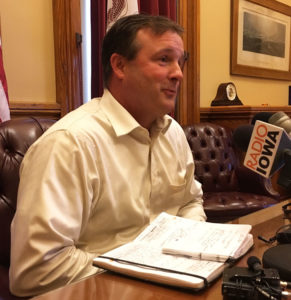 The top three Republicans in the Iowa statehouse disagree on the proper way to proceed after a jury in July sided with a senate employee who said she was sexually harassed. The state wound up paying a $1.75 million settlement to the former communications director for Senate Republicans.

Governor Kim Reynolds and House Speaker Linda Upmeyer back hiring a human resources officer for the legislature to field complaints about sexual harassment.

Late this afternoon, Upmeyer called it “the right decision” and she’s hiring one. Reynolds praised the idea this morning. Senate Republican Leader Bill Dix this afternoon said that may be the right path eventually, but Dix plans to hire an outside consultant first.

“I’m a farmer. I don’t deal with human relations issues on a daily basis…When you find yourself in that kind of a situation, you should seek out the advice and counsel of people who do,” Dix said. “Nothing against the people here who’ve brought me to the best of their ability recommendations at this point. I just think that’s the smartest and best way to go forward. Let’s get some advice from those first before we plow off in a direction that we don’t know.”

Dix met with reporters for half an hour this afternoon and discussed a wide range of issues that came to light after an employee he fired in 2013 sued the state over a “toxic” work environment. Dix said he’s committed to a “zero tolerance” policy when it comes to sexual harassment and he’d like to see improved anti-harassment training for senators and their staff.

“Sensitivity is really at the heart of this whole discussion in the first place,” Dix said. “It’s ensuring that employees who have a concern, that they have a safe environment and a safe expectation of bringing that complaint forward without the fear any retaliation,” Dix said.

House Speaker Upmeyer said in a written statement issued after Dix’s news conference that she’ll proceed with hiring a human resources professional “in order to provide the best working environment we can for our employees.”

In addition, both Upmeyer and the governor are calling on Dix to release details of the internal review of sexual harassment allegations made by the senate employee Dix fired four years ago. Dix told reporters today that he believes Kirsten Anderson’s allegations, but Dix said he’ll wait ’til the consulting firm he plans to bring in tells him what’s appropriate.

“The reason I hesitate now is that investigation was taken place with what I believe was the expectation of the employees to provide that information confidentially,” Dix said. “Now if it later is to be determined that doesn’t need to be the case, that’s something we would review later on at the advice of the outside organization.”

It’s also unclear whether a written report currently exists. Dix said interviews with employees were still being transcribed. Secretary of the Senate Charlie Smithson near the end of the news conference told reporters there was a written report.

Four of the employees Dix oversees testified in court that a male co-worker was mainly responsible for the “toxic work environment” in the Senate office. Reporters asked Dix if he had fired that employee this fall, but Dix said the man submitted his resignation and it was accepted.