You are here: Home / Agriculture / Reynolds, in Texas, to lobby for getting Bill Northey freed 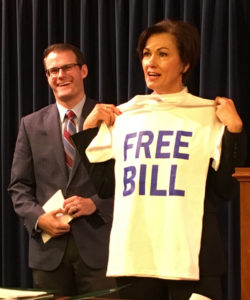 Governor Reynolds unfurled this Texas-bound message at end of her weekly news conference.

Governor Kim Reynolds is leaving this afternoon for Austin, Texas, for a meeting with other Republican governors.

“I will be wearing this as I head into hostile territory,” Reynolds told reporters at her weekly news conference.

“This” is a white t-shirt, featuring big, black letters that say: “Free Bill.”

The “Free” part refers to the hold Texas Senator Ted Cruz has placed on Northey’s nomination to a job in the USDA. Reynolds told reporters it’s time for Cruz “to move on” and let Northey head to Washington.

“He is a great secretary of ag. He would do a great job representing farmers and ranchers all across this country and, as far as I know, Texas has quite a few of them, too,” Reynolds said, “so it’s time to ‘Free Bill’ and let’s move on and we’re going to be supporting the ‘Free Bill’ t-shirt as I head into Texas.”

Cruz is seeking a meeting with President Trump to air his concerns about job losses at oil refineries that Cruz says are caused by the federal production mandate for ethanol.