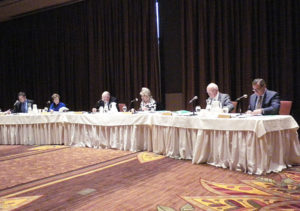 The IRGC voted down a request for a Cedar Rapids gambling license.

The Iowa Racing and Gaming Commission voted down for the second time a request from Cedar Rapids for a gambling license on a 3-2 vote today .

The vote was tied 2-2 and came down to Commissioner Kris Kramer of New Hampton. She says her decision was based on the impact on existing casinos.

“It has been said that if Cedar Rapids does get a license that the neighboring casinos will fell the negative affect, but will bounce back. I disagree with that statement,” Kramer says. Kramer says the impact could hit especially hard on the casinos in smaller cities and the surrounding community.

“The income from the nonprofits would be substantially decreased –which in turn would devastate some rural communities that rely on it,” Kramer says. “Rural Iowa does not have all the advantages that the larger cities have. At this time, I cannot approve a license.”

Commissioner Delores Mertz of Algona pointed out that she was the only one to vote for a Cedar Rapids license when it was reject on a 4-1 vote three years ago. “I felt like the second largest city in the state deserves something, and I still feel that way,” Mertz says.

Commission Chair Rich Arnold of Russell was the other vote in favor of the Cedar Rapids license. He acknowledged the concerns about the impact on existing casinos.

He says he recognizes the impact on the other casinos, but feels the overall investment in a new Cedar Rapids casino would outweigh the negative impact.

Arnold went on to say he liked the proposal for a smaller Cedar Rapids casino out of the three submitted.

“I will support the Cedar Rapids project two, two-point-oh. I want to emphasize that my support is not an invitation for smaller size or more casinos,” Arnolds says. “The project is unique in my mind because it will bring in over 100 million dollars in investment into the community and into the state without increasing the overall number of gambling devices by a material amount.” Commissioner Jeff Lamberti of Ankeny says he did not decide on voting against the new license until just recently and says it was not easy to vote against Cedar Rapids again.

“More difficult than three years ago. I think some things have changed, I think we have great proposals before us. I tried to take into account the factors we set forth in our rules and they are competing, and it makes it difficult because there are great arguments on both sides of this process.,” Lamberti says.  But he says in the end it comes down to maintaining the casinos that are already operating in a market that isn’t expanding.

“The overriding factor for me is I simple don’t see much of a change. I don’t see any growth in our market– it has been relatively stagnant,” according to Lamberti. “I don’t see anything that tells me that we are going to enter into some period of significant growth.” Commissioner Karl Heinrich was the third no vote. Heinrich of Council Bluffs says he made his decision based on what was best for the entire state.

“I’m right not sure that adding a new license ill help the state in any way…if any of the proposals were approved, it would shift our resources,” Heinrich explained. He says that shift would be away from the rural areas that rely in the casino funds.

“So, I don’t think now is the time to change the dynamics of what we are seeing working well at this time — so I am not in favor of a new license,” Heinrich says. The commission made its decision during its meeting at the Diamond Jo Casino in Dubuque.

Wild Rose Casinos which made one of the proposals for Cedar Rapids issued this statement after the vote:

We believe that our proposal struck a delicate balance in terms of offering long-term benefits to Cedar Rapids and Linn County—entertainment; support for downtown hotels, restaurants, theaters, concerts and shops; and nonprofit funding—while also addressing the concerns articulated by the commission back in 2014. It is disappointing that Linn County will not get a gaming license; as always, we respect the decision of the Iowa Racing and Gaming Commissioners. Wild Rose continues to operate in Iowa, and our team remains focused on identifying new ways to grow and expand our operations in the Midwest.