You are here: Home / Agriculture / Iowa’s first bioreactor gets a recharge 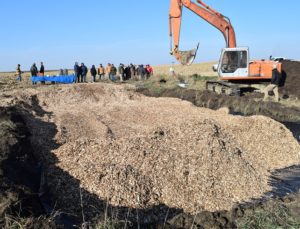 New woodchips are spread into a bioreactor near Jefferson, Iowa.

The first woodchip bioreactor installed in Iowa was recently recharged with new woodchips as part of the reconditioning process. The bioreactor, located near Jefferson in Greene County, was installed nine years ago.

Chris Hay, an environmental scientist with the Iowa Soybean Association, says the bioreactor has done its job in reducing nitrate flow into surface water. “The Iowa Nutrient Reduction Strategy says, on average, that bioreactors will reduce about 43-percent – load reduction in nitrogen – and that’s right in line with what we saw from this bioreactor,” Hay said. “Up to 60-percent at times and down to 20-percent, but in that 40 percent range, on average.”

There are currently about 40 bioreactors in Iowa.