You are here: Home / News / Sasse urges Iowa crowd to ‘be on guard against political idolatry’ (AUDIO) 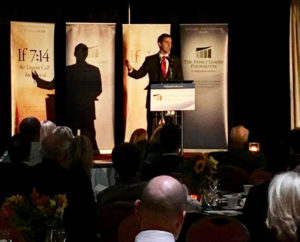 Nebraska Senator Ben Sasse warned against false idols, political tribalism and an addiction to “24/7 news cycles” during a speech in Iowa tonight.

Sasse was the featured speaker at a fundraiser in Des Moines for The Family Leader, a Christian conservative organization. Sasse told the crowd elections can make the country “worse” or “incrementally better,” but Sasse suggested it was “almost a little bit un-American” to organize your life around two- and four-year election cycles.

“America is made up of a people who think in decades and in centuries, not in terms of political addiction and political consumption and short-term-election ways of thinking about the world,” Sasse said. 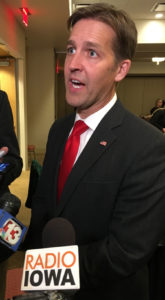 Sasse was elected to the U.S. Senate in 2014. He has raised the hackles of Iowa Republican Party leaders and a formal reprimand from Nebraska Republicans for his critiques of President Trump. Sasse, never said Trump’s name during his remarks, described himself as a “temporary public official affiliated with the Republican Party” who is “a Christian first.”

State Representative Steven Holt, a Republican from Denison, was impressed.

“It was absolutely amazing,” Holt said. “I’d never heard him speak before and I thought he did a fantastic job and a lot to think about.”

Norman Rozendaal of Monroe said he was “honored” to be in the room.

“I have never heard anybody as articulate as that man, off the cuff, saying exactly what has to be said in our American culture,” Rozendaal said. “I would give him A+++.”

Sasse told reporters after his speech that the country’s two major political parties have become — in his words — “crappy…brands” that have devolved into political tribes.

Bob Vander Plaats, the president of the group that hosted Sasse tonight, started the evening by telling the crowd cultural change won’t be accomplished at the ballot box.

The crowd of 550 applauded.