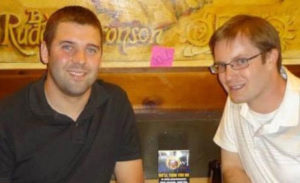 Thirty-four-year-old Jonathan Wieseler was found shot to death on April 23 in Lederman Bail Bonds – his place of work. Police have not made an arrest in the case. Wieseler’s best friend, Adam Santi spoke with KCRG-TV earlier this month.

“It’s such a disgusting thing that happened to him,” Santi said. Family, friends and strangers donated a combined $5,000 to help Santi place a plaque, honoring his friend, in the Iowa City Public Library.

Wieseler was an avid reader. Shortly after the unveiling of the plaque, Santi told KCRG-TV the pain of losing his friend won’t go away when police eventually find Wieseler’s killer.

“I don’t know if there can be anything that will fully bring closure to this situation, including an arrest and a conviction,” Santi said. Iowa City Police have a news conference scheduled for 2 p.m.