You are here: Home / News / Weather expected to be good for Thanksgiving travel 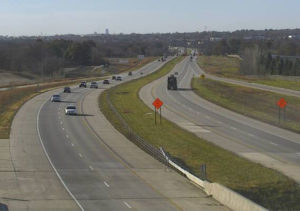 DOT traffic camera on I-35 near Ankeny.

Forecasters say it should be a relatively quiet weather week for Iowans, which is good news as it’s also one of the busiest travel weeks of the year.

Meteorologist Dennis Todey, director of the U.S.D.A.’s Midwest Climate Hub — based in Ames — says there are no major storm fronts brewing, but they’re staying vigilant.

Todey says, “There are a couple of systems that could be coming through the region that we should keep an eye on, just because it is that time of year when we have enough cold around and if we get a system through, it can always could produce something.” Since many tens of thousands of Iowans will be on the road to see loved ones for the Thanksgiving holiday, Todey says travelers should pay close attention to local forecasts, wherever they may end up.

He says, “The indications are always go ahead and plan on doing what you’re going to do but always be looking a couple of days ahead to make sure you’re not going to be caught up in something.” The longer-range forecasts are trending toward mild temperatures and less rain or snow.

“We’re seeing from the six-to-ten-day and eight-to-14-day outlooks, especially in the Central and Western U.S., warmer and a little drier-than-average conditions are what people are leaning towards here,” Todey says. “So, that’s not a bad thing from a travel standpoint and from people still trying to get crops out of the fields.”

Todey says the development of the La Nina weather pattern in the Pacific Ocean is confirmed and it likely will have an impact later in the winter.