You are here: Home / Fires/Accidents/Disasters / Iowa soldiers home from hurricane duty in time for Thanksgiving 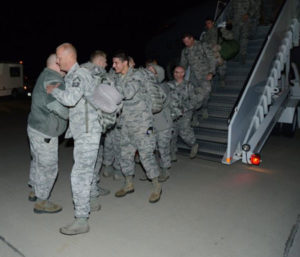 A group of Iowa National Guard soldiers will have plenty of stories to share with friends and families this Thanksgiving after returning from duty providing security in Puerto Rico following the island’s devastation by Hurricane Maria.

Master Sergeant Mathew Rietz was among the group of security specialists from the 132nd Wing in Des Moines who landed in Puerto Rico on September 26.

“When we got there, there was basically no vegetation left on the trees and pretty much the whole island was still kind of wiped out as far as the power grid. And it went on that way for about the next month until you saw the power come on in the airport area where we were stationed,” Rietz says. He says the lack of power left the country without traffic lights.

“And so it was very chaotic. Slowly over the time that we were there the power was slowly coming on, but when we got ready to leave they were still pretty desperate as far as traffic systems and stuff like that…but you could definitely see the difference from when we got there and when we left,” Rietz says. The Iowans were given the task of providing security at the San Juan airport so that relief supplies could get in.

He says the main concern when they got there was to help the 156th Security Forces Squadron as they went and took care of their own families. “As we were able to help them out and they were able to get back on their feet — then we also went out into the community and helped out with food and humanitarian missions,” according to Rietz. 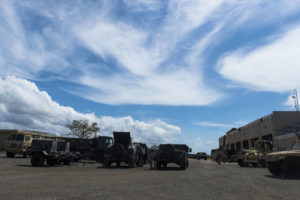 Truck being loaded for duty in Puerto Rico.

Rietz says they had taken a month’s supply of food with them and have to have more flown in as the mission went on. He says that was a key concern and they did hear of some issues with people on the island as the food supply got worse. But, he says they didn’t run into any big problems with the people they worked with.

“Everyone was very positive — especially after everything they went through being hit with two hurricanes in a row basically,” Rietz says. “And even the people that I worked with personally that didn’t have power on until we were getting ready to leave. Their whole outlook on things was positive and they were just happy to have any help that they could get.”

Rietz says that positive attitude made the mission better for the Iowans as they tried to help. “Because going into something like that…people can be desperate and a lot of despair,” Rietz says, “but they were all positive while we were there, not only the soldiers we worked with from Puerto Rico, but all the civilians in Puerto Rico had a positive attitude and they were just happy to have any help that they had.”

Rietz says they saw signs of the vegetation starting to grow back on the trees as they prepared to leave.