You are here: Home / Human Interest / Some Iowans eat ostrich instead of turkey for Thanksgiving 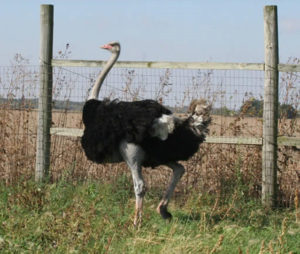 Turkey is the traditional bird eaten as part of the Thanksgiving Day meal — but some Iowans are trying something different.

The co-owner of Obviously Ostriches north of Alden, Helen Wall, says they raise the birds from birth to around one year old before having them processed.

She says they have some customers who tell her they are having ostrich filet for Thanksgiving and Christmas dinner. Wall says ostrich meat doesn’t taste the same as the traditional turkey meat.

“It would remind you of beef, I’d say it tastes like the best steak you ever ate,” according to Wall. And if you thought a turkey drumstick was big enough for a meal, Wall says the ostrich tops it.

“We have decided for our Thanksgiving to cook an ostrich drumstick,” Wall says, “so the whole drumstick which is about 20 pounds.” Wall says they currently have 21 ostriches

which will grow to about 250 pounds before they are sent off for processing. Each bird will produce up to 80 pounds of boned meat. For more information go to iowaostrichfarmer.com.