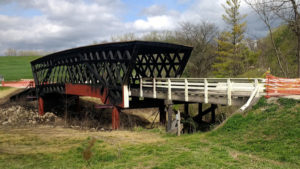 An effort to replace one of the famous covered bridges in Madison County is gaining momentum. The Cedar Bridge near Winterset was destroyed by arson back in April.

Brenda Hollingsworth, with the Madison County Historic Preservation Association, says the fundraising goal for replacing the bridge is $550,000. “We are at $246,000 and we have made an application for A Great Places grant that would pay for the remainder of that,” Hollingsworth says.

The group should learn by December 15 if they’ll be getting the grant from the Iowa Department of Cultural Affairs. “With this particular grant, we’d have a two year window to finish the project, so we wouldn’t have to complete the bridge until 2019 – which is a reasonable time frame to do that,” Hollingsworth says. If they don’t get the grant, Hollingsworth says they plan to stay on their proposed timeline of beginning construction in late 2018.

The Cedar Bridge was featured on the cover of the best-selling novel “The Bridges of Madison County,” which was adapted into the 1995 movie starring Clint Eastwood and Meryl Streep.

The bridge has been destroyed by fire twice. It burned in 2002, when insurance helped fund a replacement. Premium rates increased and the insurance was dropped. Hollingsworth says that will never happen again and all six covered bridges in Madison County are now insured.

Three people, between the ages of 17 and 19, were arrested and charged with setting the April 15 fire at the Cedar Bridge.