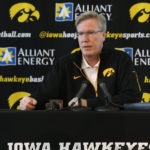 Junior forward Nicholas Baer is expected to play on Tuesday night when Iowa visits Virginia Tech in the Big Ten/ACC Challenge. The reigning Big Ten “Sixth Man of Year” suffered a broken finger in preseason practice and coach Fran McCaffery says his return will give the Hawkeyes a much needed veteran presence.

“Especially when you go on the road”, said McCaffery. “Guys that have been in those kinds of road environments and performed successfully are who you need so he will be out there a lot.”

Defense has been a concern in a 4-2 start to the season and that will be a key against a Hokie squad that is averaging 102 points per game.

“They are as good of transition team as I have seen in a long time”, added McCaffery. “This is a slashing team that has multiple three point shooters so that is going to spread your defense out.”

Tuesday will be the fourth meeting between Iowa and Virginia Tech, with the Hokies winning the previous three contests.