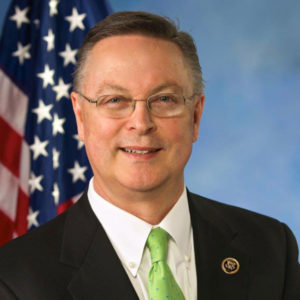 Iowa Congressman Rod Blum says the entire nation should use something like Iowa’s non-partisan system for drawing congressional district lines.

The U.S. Supreme Court is considering a case that would end the practice of drawing congressional and legislative district lines to gain partisan advantage. This fall, Blum signed onto a brief presented to the Supreme Court that makes that argument.

“I don’t think it’s representative government when districts are gerrymandered to favor one party over the other,” Blum says. “Republicans have done it and Democrats have done it throughout the years.”

Iowa policymakers decided nearly 38 years ago to have the nonpartisan Legislative Services Agency draw the maps for congressional and legislative districts. The Iowa House and Senate cannot adjust the maps and must either vote to accept or reject the district maps. Thirty-seven other states use a partisan system for drawing congressional district lines and Blum says that means the parties have created too many “safe” districts.

“Let me give you an example. There’s 435 House seats in the United States. I’m guessing in any election year, maybe 400 of them are safe, so only 35 House seats — mine happens to be one of them — will be competitive in any given election year. That’s just wrong,.” Blum says. “Most of my colleagues — Republicans and Democrats say: ‘I couldn’t lose my house seat if I tried because it’s a safe district,’ — you know, it’s a safe Democratic district or a safe Republican district. That’s wrong.”

Blum is a Republican from Dubuque who represents Iowa’s first congressional district and there are more registered Democratic voters in that northeast Iowa district.

“I guess I’m proof that if you go out and listen to the people in your district and you work hard for them that you can win an election even in a district that has more of the opposite party registered voters,” Blum says.

Four Democrats are vying to challenge Blum’s bid for reelection in 2018.