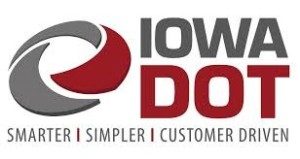 The Iowa Department of Transportation is considering seeking out sponsors for the Highway Helper trucks which operate on the interstates in the Des Moines, Council Bluffs and Iowa City/Cedar Rapids area.

The DOT’s Scott Marler says half of the 40 states which have the program do some sort of sponsorship for the trucks. “Typically with a sponsorship of a program like this, the third-party sponsor will typically put a logo at a space on the side of the vehicle,” Marler says. “And in exchange they provide safety wrapping for the vehicle and they also provide some revenue back to the department for the opportunity to put those logos on the side of those trucks.”

The program has come under some fire for its cost — which Marler says it around one million dollars for each of the three areas where they operate. The DOT hires an outside company to provide the service and he says the sponsorships would help offset those costs. The plan is to include the third-party sponsorship as part of their request for proposal when they bid out the service when the current contract expires in 2018.

Marler says from what they’ve seen in other states, the sponsorship would cover a small portion of the cost of operation. “It varies a lot depending on the specifics of your state and the traffic volumes and things like that,” according to Marler. “We’re thinking that it’s in the range of 10 to 12 percent of the of the cost of program, would be kind of a reasonable expectation.”

Marler says companies which are interested in promoting safe driving — such as insurance companies — are some of the potential sponsors. Marler says they provided more than 17,000 “services” to people in the three operating areas in 2016. He says they hand survey cards to the motorists who were helped, and they have had a 94% excellence rating.

“You can imagine when you are on the side of a busy interstate and if it’s your son or daughter or parent or grandparent and they have a flat tire or a problem — and there is a service there that can help them safely and quickly get out of harm’s way and get back on their way — that has been tremendously effective,” according to Marler. “Really in keeping traffic flowing and in keeping both our traveling public and those who might have challenges on the side of the road — to keep everyone safe.” Marler says they haven’t made a final decision on the sponsorships.

He says they are evaluating the idea now and trying to determine if they want to move ahead with a sponsorship program and should have a decision by early in 2018. The Highway Helper trucks run in the three areas from five a.m. until eight p.m. Monday through Friday. Marler says they also run during some holidays when there is going to be heavy traffic on the roadways.