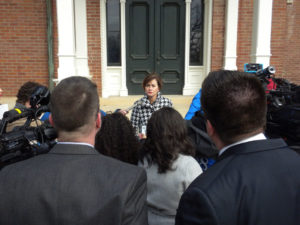 A report released Friday after interviews with staff who work for Senate Republicans indicated there is confusion over what a “zero tolerance” policy on sexual harassment means.

“It seems pretty self-explanatory that zero tolerance is zero tolerance,” Reynolds told reporters. “…Some people said: ‘Well, I don’t know if we need to do training.’ Well, evidently it’s important that we’re all clear and we all have an understanding of what is expected and what will not be tolerated and so, just from that perspective alone, I think it’s really important that we take a look at making sure we’re providing the right training and that people understand what the expectations are.”

The report released Friday indicated senators made comments about sex on the senate floor where bills are debated in public view. Reynolds said everyone has an obligation to speak up.

Reynolds served two years in the state senate — in 2009 and 2010 — and doesn’t remember overhearing her senate colleagues make inappropriate remarks.

“You know, I just don’t recall that at all,” Reynolds told reporters today. “I was in the minority and I was spending a lot of time working with agencies and directors and learning about what they did and really trying to do my best to represent the constituents that I was sent there to represent.”

Reynolds said the Senate’s Republican leader took a “positive step” by bringing in a former senator who worked as Wellmark’s human resources director for advice.

The Senate’s Democratic leader said the report released Friday about the senate’s work environment is “deeply troubling” — especially testimony from staff who say they won’t report harassment, for fear of retaliation. Four and a half years ago, Senate GOP Leader Bill Dix fired a staffer who had complained about harassment. She has won a $1.75 million settlement from the state. Dix has said she was fired for poor work.