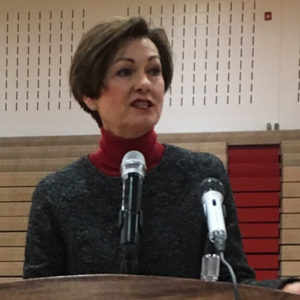 Governor Kim Reynolds today said she’s confident there will be a “seamless” switch after another change in the state-run Medicaid program.

One of the three private companies that began managing care for Medicaid patients in 2016 is pulling out of the program this Thursday. State officials originally said 215,000 Iowans in the Medicaid program would be automatically enrolled with UnitedHealth, but could choose to switch to Amerigroup. Amerigroup is the other remaining carrier.

Yesterday, though, about 10.000 Iowans found out they cannot make that choice. State officials will step in to manage their care instead.

“The Department of Human Services has put together a transition plan and they’re monitoring it very closely every single day,” Reynolds said. “Our goal is to make it as seamless as possible, to make sure that we continue to offer continuity of service, again, to Iowans who really need a coordinated care and need that extra help and to really do everything we can to eliminate as much disruption as possible.”

Iowa’s switch the privately-managed care was approved by the federal government as a way to manage costs and provide choice to Medicaid patients. Iowa Democrats have opposed what they call “privatizing” the Medicaid program and this week the Iowa Democratic Party chairman called the system “ReynoldsCare”. The governor said it’s a “partnership” to ensure the program is sustainable for taxpayers and serving poor, elderly and disabled Iowans who cannot afford health care insurance on their own.

“It’s not perfect. I’ve never said it was perfect, but I am willing to put the time and the effort into making sure that Iowans get the care that they deserve in a managed and coordinated and more modern delivery system,” Reynolds said. “I’m not going back.”

Reynold said she has “full faith and confidence” in the people managing the Medicaid program for 600,000 Iowans. Health care providers say they’re not getting paid and Democrats say it’s time to revert back to a standard fee system with state-paid employees manage Medicaid.

Reynolds made her comments late this morning during a brief news conference in Boone. Iowa officials are seeking a deal with another private company to manage care for Medicaid patients, but that contract won’t be signed until the summer of 2019.

Medicaid patients seek a switch from one managed care company to another based on which companies have a business relationship with their doctors and providers.