You are here: Home / News / Iowa Democratic Party prepares ‘army of volunteers’ for 2018 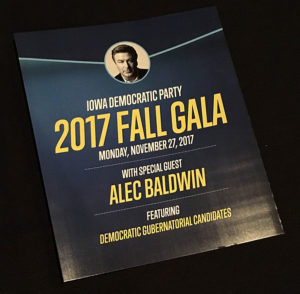 The Iowa Democratic Party’s chairman is citing three special legislative election victories in the past year, along with volunteer training, as evidence his party is bouncing back from the 2016 General Election.

“This is really awesome,” Price said, to cheers. “Tonight we celebrate the incredible work done over the last year to rebuild and improve our party and look ahead to the opportunities this next year will bring.”

2018 will bring a statewide election for governor and six other statewide elected officials, along with four congressional races and 125 contests for seats in the Iowa Legislature. An “unprecedented number” of Democrats are running for office in Iowa, according to Price.

“I can say tonight without any hesitation that the future of the Democratic Party has never been brighter,” Price said to cheers.

Price acknowledged Democrats had been having “tough and candid conversations” about the future of their party after disappointing election losses to Republicans. Price is warning Republicans, as a result, will have the power of the incumbency, but he counters that Democrats win with grassroots grit.

“We are preparing volunteers like never before,” Price said. “We already have over 600 who are trained and ready to go. We are working with our county parties to develop long-term plans and give the resources they need to be successful at the local level and we are focused on rebuilding our infrastructure by putting more emphasis on relationship building and local organizing, so that by the end of this primary, we will have an army of volunteers in all 99 counties — trained, organized and ready to elect Democrats.”

Price is emphasizing an “every election matters” message and he points to 81 percent of union-backed candidates for school board seats won in September. He also cited stats on October’s “recertification” elections that maintained 93 percent of union bargaining units in local and state government offices in Iowa.