You are here: Home / News / Lion cubs born in Iowa expected to help the species survive 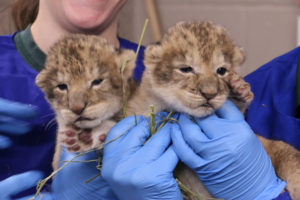 Two of 3 lion cubs born at the Blank Park Zoo.

The Blank Park Zoo in Des Moines reports one of its two female lions has become the mother of three cubs.

Neema gave birth earlier this month to two female cubs and one male. The cubs are part of a Species Survival Plan zoos have put in place to protect the great cats.

Zoo CEO Mark Vukovich says the past 20 years have seen a steep decline in the number of wild lions.

“The number of lions has dropped from 100,000 in 1990 to the low 20s or high teens as of the first of last year,” he says. Vukovich says the new-born cubs will play an important role in preserving the species.

“We’ll keep them a year or two or maybe even three depending on maturity and what’s going on with captive species,” Vukovich says, “but they will move on to another site and help the species survive.” Neema, arrived at Blank Park in June and mated with Deuce, who is only three generations removed from his wild heritage in Africa. Deuce, has lived at Blank Park since 2012.

The cubs will go through a series of vaccinations before they are available for public viewing. Plans for naming them will be unveiled in the coming weeks.