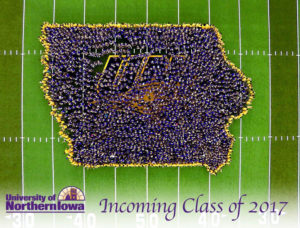 School photo of the UNI’s freshmen.

The presidents of the three state-supported universities are asking the governor and legislators to provide an additional $12 million to the schools next year, money that would be used to boost the amount of financial aid for students who are Iowa residents.

To make his case, University of Northern Iowa president Mark Nook is citing a comparison of tuition-and-financial aid packages for students at UNI with similiar institutions in surrounding states.

“What we find is that we’re much below the average on the available aid, so well above on the cost and well below on the aid that’s available,” Nook says. “…We have slipped in the wrong direction. We’ve moved to a low aid/high cost model, which in the long run is simply not sustainable for the university or for the state.”

Wendy Wintersteen took over as president of Iowa State University two weeks ago. Wintersteen says if ISU gets more state money to increase financing aid, she hopes to use it for completion grants program.

“Just to give you an example: we end up with students that might be a junior or a senior. They’ve maxed out the loans they can take. They aren’t eligible for additional student financial aid of any form,” Wintersteen says, “and so we are able to step in and look where they’re at. How far away are they from gradiation? Would a completion grant of $1,000, $1,500 make the difference so they don’t end up having to step out of school for six months or a year to work to get the money so they can graduate?”

University of Iowa president Bruce Harreld says student financial aid at his institution is “based on need and merit.”

“With over 45 percent of our undergraduate students graduating with zero debt and over $1,000 reduction in average debt since 2014, the University of Iowa is working hard to balance increased tuition with effectively directed financial aid,” Harreld says.

The three university presidents made their comments during a budget presentation in the governor’s office yesterday.