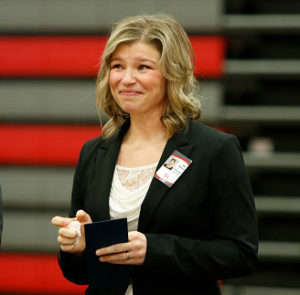 A teacher in a small southern Iowa school district is one of just 44 teachers nationwide to receive a Milken Educator Award this year.

Joni Readout learned about the award at a surprise announcement ceremony Wednesday in Leon. Readout is an instructional coach at Central Decatur Schools, working with other teachers to improve their classroom work.

“I bring optimism and a positive attitude to work with me every single day. I greet students, I challenge students, I have very high expectations for them, and they respect and know that,” Readout says. Her efforts were noticed by the Milken Family Foundation, which honors teacher excellence each year. Readout says it’s quite an honor for a small school district in rural Iowa.

“We have excellent things happening here at Central Decatur and it’s great to have the recognition for our school, for our students, for our community,” Readout said. The district has just under 700 students in kindergarten through 12th grade. Sometimes referred to as the “Oscar for Teachers,” the Milken Educator Award comes with a 25-thousand dollar cash prize. Readout said she hasn’t had time to think about what she’ll do with money, but her students have already suggested a giant pizza party.