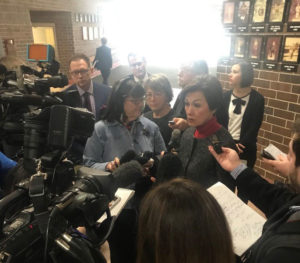 The amount of conventional ethanol blended into the nation’s gasoline supply next year will be roughly equal to this year’s required level.

The EPA has met today’s deadline for setting the Renewable Fuels Standard for 2018. As indicated a couple of months ago, the federal mandate for biodiesel and “cellulosic” ethanol will be lower in 2018. Required production of traditional ethanol production will remain the same next year.

“It is important to our economy. It’s important to rural Iowa. It’s how we add value to the products that we grow,” Reynolds said. “…I’m going to get up on Friday and I’m going to go back to the mat and we’re going to continue to fight on behalf of Iowans and Iowa farmers because we believe it’s important, but we can, in fact, feed and fuel the world.”

This fall, Reynolds joined other farm state lawmakers and the biofuels industry in a public relations push to persuade President Trump to insist his E-P-A side with farmers and ethanol producers rather than the oil industry, which wants reduced biofuel production mandates. Reynolds called President Trump and met with the EPA Administrator.in October to press the issue.

“It is really important to the economy, the rural economy in Iowa, especially our Iowa farmers,” Reynolds said Tuesday.

Senator Chuck Grassley issued a statement Wednesday night, saying the EPA’s decision is “disappointing,” and falls “short of the full potential of the U.S. biofuels industry.” However, Grassley said he is glad the EPA backed off a proposal that would have reduced mandatory production levels even further.