Key Republican legislators say tax reform efforts at the state level are dependent on any tax changes that may be made at the federal level. Iowa House Republican Leader Chris Hagenow today said the GOP’s goal at the state level is income tax cuts for both individuals, business owners and corporations.

“Our perspective is that whatever we do on income taxes…all Iowans should be able to benefit from that,” Hagenow told reporters after a legislative leaders’ forum sponsored by the Greater Des Moines Partnership.

Republicans hold a majority of seats in the Iowa House and Senate and would be able to pass a plan without Democrats’ votes. The GOP has pushed a variety of proposals in the past, including a flat tax. It would get rid of all deductions and impose a single state tax rate on income. Hagenow told reporters discussions among Republicans haven’t advanced far enough to decide whether any tax changes would be phased in or take effect immediately in 2018.

“I think it’s obviously going to be a challenge because there are so many moving parts to whatever it is we decide to do,” Hagenow said, “and I think it also depends on what the federal government may or may not do on tax reform, so once those pieces are in place, I believe we’ll be able to make better decisions.” 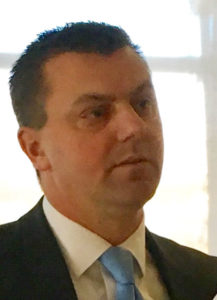 Senate President Jack Whitver, a Republican from Ankeny, said there’s another reason tax discussions are in a holding pattern. A state panel meets next week to set an up-to-date estimate on how much tax revenue the state is expected to collect under the current system.

“And then we can start looking at everything on the table for tax reform. You know whether it’s rates or credits or exemptions, we need to look at everything,” Whitver told reporters. “Really, income taxes haven’t been changed in the state of Iowa in over 20 years and so we feel it’s time to take a fresh look at that and see if our tax structure is set up for a 21st century economy. Now is as good a time as any.”

Tax reform is the “number one priority” for Senate Republicans in 2018, according to Whitver. Republican Governor Kim Reynolds has said tax policy is a priority for her in 2018 as well.

Senate Democratic Leader Janet Petersen told the audience at today’s forum that the legislature needs “to be very cautions…and make sure that Iowans aren’t left behind” by the tax plan Republicans pursue. Petersen also argued the state should get its “budget mess” in order first “before we start looking at reforming our tax system.”