You are here: Home / Fires/Accidents/Disasters / Black bear hit and killed on I-80 in Poweshiek County 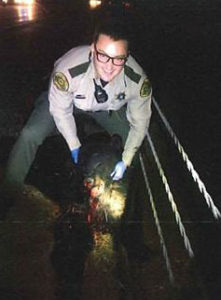 A Powesheik County Deputy with the bear.

A black bear was hit and killed by a vehicle on Interstate-80 near Victor last night.

The Poweshiek County Sheriff’s office report says a 27-year-old Texas man was driving west on Interstate 80 shortly before 9:30 Thursday night when his minivan hit the bear. The driver of the minivan wasn’t hurt and neither was his passenger, but the 250-pound bear died instantly. The van wound up in a ditch and had to be towed away.

Officials say the male black bear is the same one that’s been sighted several times recently in Poweshiek County.