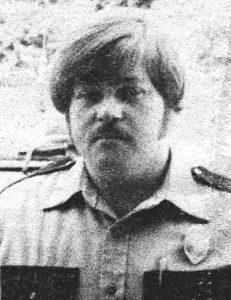 An Iowa police officer killed in the line of duty 40 years ago was honored Sunday. Family, friends and fellow officers gathered near Prairie City at a Highway 163 bridge which is now named for Donald “Rusty” Hewitt.

The part-time Prairie City cop was killed on December 3, 1977 while assisting Iowa State Patrol Officers during a high-speed pursuit. Hewitt was 24-years-old.

Current Prairie City Police Chief Joe Bartello says a friend of the Hewitt family came up with the idea of naming the bridge in honor of Hewitt. “I started looking in to it and working with the DOT. I found out the process was not as complicated as you might think it is for something through the DOT,” Bartello said.

The process basically involved showing the project had the support of both the local city council and the Jasper County Board of Supervisors. “I presented to both and both approved it,” Bartello said. “We passed that approval off to the DOT, we were able to get a sign designed and placed here.”

The bridge at mile marker 18 on Highway 163 is now identified as the Donald Rusty Hewitt Bridge. The crash that killed Hewitt also killed a passenger in his vehicle, 20-year-old Kenneth McCuen Jr. of Prairie City.