You are here: Home / Sports / Iowa State responds after halftime in win over Northern Illinois 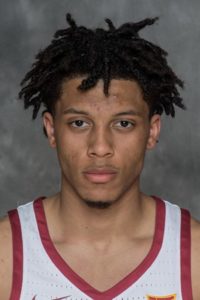 Freshman Lindell Wigginton turned in a career-high 28 points to lead all scorers. Senior Donovan Jackson racked up 24 points behind 6-of-12 shooting from behind the arc. Senior Nick Weiler-Babb (14) and freshman Cameron Lard (12) also reached double figures.

Iowa State was efficient on offense tonight. The Cyclones were 34-of-66 from the field, scoring on over 50% of their attempts. ISU was pouring it in from everywhere, connecting on 14-of-26 attempts from downtown. The 14 threes are the most by the Cyclones this season.

The Cyclone offense found its groove in the second half. At the intermission, the Huskies led the Cyclones, 38-36. Out of the break, Jackson connected on a three that would foreshadow what would come the rest of the half.

The Cardinal and Gold went on to fire 9-of-15 from three in the second half behind Jackson’s 5-of-9 three-point shooting.

Iowa State played well defensively in the second stanza. Midway through the half, the Cyclones busted out a 16-2 run to take control of the game. ISU held Northern Illinois to 16-of-36 shooting after the intermission and forced six turnovers.