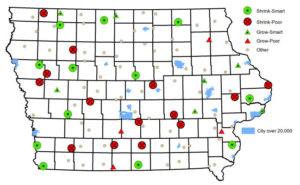 An Iowa State University rural sociologist has identified a dozen small towns in Iowa where the quality of life is thriving despite losses in population.

Dave Peters calls them “shrink-smart” towns. He says a high quality of life doesn’t depend so much on a strong local economy, but rather on solid social connections.

“People in shrink-smart towns tend to be more frequently involved in community improvement projects and they were members of a lot more local organizations in the community,” Peters said.

Iowa State has been tracking life in towns with fewer than 10,000 people in each of the state’s 99 counties since 1994. In these shrink-smart towns, citizen have managed to bridge divides created by economic class, ethnicity and gender.

“People in these towns rated their communities as having a culture of openness and support,” Peters explained. “So, residents said they felt safe in their towns, they felt they could trust their neighbors, and they felt the community was supportive of themselves and others.”

The shrink-smart towns Peters identifies range in population from 460 in the Mills County town of Pacific Junction to around 2,100 in Sac City. Nine of the 12 towns named by Peters to the list have populations fewer than 1,000. They include Allerton, Elma, Radcliffe and Elk Horn.