You are here: Home / News / Secretary of State will soon start mailing out voter ID cards 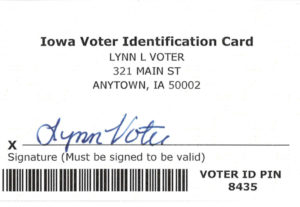 A sample of the new voter ID card.

“It should be easy to vote but hard to cheat. And that’s what this new law ensures, ” Pate says. “We are taking the unprecedented step of mailing free voter ID cards automatically to every registered voter who doesn’t already have an Iowa driver’s license or non-drivers ID.”

Pate says the cards will be sent out starting this week. “I encourage them to be on the lookout for their voter ID cards in the mail. And when they receive their card, open it, sign it, and keep it. It’s that easy,” Pate says. Anyone who loses their new voter ID card will need to contact the county auditor. Critics say the law will make it harder to vote and voter fraud is rare.

A Secretary of State Spokesman says the mailing will be followed up with public information campaigns with both supporters and opponents of the new law. A government-issued ID will be required to vote starting next year.

Democratic Secretary of State candidate Jim Mowrer issued a statement predicting thousands of Iowans will have a more difficult time participating in the democratic process.