You are here: Home / Sports / Turnovers, defense hurt Iowa in loss at Indiana 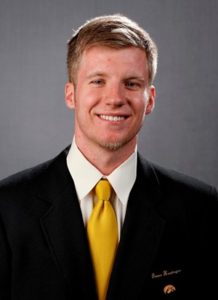 Indiana used a 14-0 first-half and 18-0 second-half run to down the University of Iowa men’s basketball team, 77-64, on Monday night at Assembly Hall.

After trailing 41-26 at the half, the Hawkeyes used a spirited rally to climb to within one before the Hoosiers flexed their muscles to hand Iowa the 13-point loss. The Hawkeyes fall to 4-5 overall, 0-2 in Big Ten play.

Trailing by 15 points at the break, freshman Jack Nunge and junior Brady Ellingson teamed up to bring the Hawkeyes back.

Nunge started the second half with a 3-pointer before Ellingson scored eight consecutive points to cut the deficit to six. Iowa closed the gap to one (43-42 and 45-44) on two Tyler Cook field goals with 15 minutes remaining.

With the game in the balance, the Hoosiers took control turning a three point advantage into a 71-50 lead. Indiana made 10-of-11 field goals during its 18-0 spurt.

Iowa finished with 10 3-pointers in the game and shot 38.5 percent from the field. Indiana finished with a 40.9 field goal percentage with eight 3-pointers and went 15-of-23 from the free throw line. The Hoosiers scored 22 points off 18 Iowa turnovers.

Ellingson led all scorers, finishing with 16 points in 24 minutes. He made 6-of-9 field goals and three 3-pointers. Nunge was the only other Hawkeye in double figures, scoring 12 points and grabbing six rebounds.