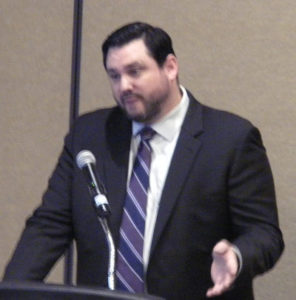 The Iowa Chamber Alliance released its priorities Wednesday for the upcoming legislative session.

Tax reform is one of the key issues, and ICA executive director John Stineman says if federal lawmakers pass tax cuts, then state lawmakers have to act to get rid of Iowan’s ability to deduct their federal taxes from their state returns.

“Because if they don’t they wouldn’t be heading off a potential tax increase on taxpayers, so it adds to their motivation,” Stineman says. “Also, it could potentially, we don’t know yet, but it could impact what we target in taxes by what the feds have cut, versus what are taxes are here.”

Stineman says the federal tax reform package may end up having a good benefit for Iowa businesses. “It’s no secret that Iowa’s budget situation is tight and it could work that the federal government cutting taxes actually makes a little bit of cash available to buy down rates or do some of the other reforms,” Stineman says. He says state lawmakers shouldn’t take away federal tax deductibility unless they address the overall tax situation.

He says Iowa’s highest corporate income tax rate is 12 percent and that is the highest in the country and would be tied for highest if it dropped to 10 percent. “Now, it’s lower than that effectively because of deductibility, but that sticker shock hurts us,” according to Stineman.

The ICA priorities say tax reform should be geared toward making Iowa more competitive. The group also says programs, tax credits and incentives should be focused toward spurring growth. Stineman was asked if the group favors cutting back some of the tax incentives given to companies in recent years to build data centers in the state. He says the favor things like the data center credits because they bring a return on investment.

“Our mentality is that those programs are very important and need to forward as is, because there is a return on investment to the taxpayer,” Stineman says. “As it relates to taxes — we do want a reduction in the burden.” The ICA priorities say they favor tax credits that foster innovation, help grow the workforce and revitalize communities.