You are here: Home / Military / Iowan who lost his life helping others at Pearl Harbor honored in Dubuque 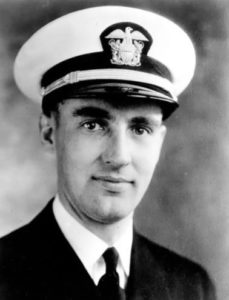 A ceremony in Dubuque on this Pearl Harbor Day honored an Iowan who gave his life so others could live.

Navy Chaplain Al Schmitt of St. Lucas was aboard the USS Oklahoma when the Japanese planes hit the ship in the harbor and it started to capsize. Schmitt allowed others to get through a hole to safety as water poured into the Oklahoma — and he never made it out.

The Secretary of the Navy just recently award Schmitt the Silver Star for his heroic acts after years of efforts by his family and others on his behalf. Great-nephew Steve Sloan never got to meet him — but knew the story. He says the family always thought “Father Al” was a hero, as did those who knew him, and felt it was appropriate for the military to recognize him with the medal.

Sloan, is a dentist who like Schmitt went to Loras College and says it wasn’t just the family that pushed for the Silver Star. He says there have been four or five other attempts to get the medal upgraded, but none were successful. Sloan says the family felt it was important to keep the story alive and continue pursuing the effort to get the review board to upgrade the award given to Schmitt.

“The initial one was done by the Oklahoma crew following World War Two. It has to get to a certain level to be review by the board — and it seemed like it had never gotten to that level by the people who have tried it in the past,” Sloan explains. The Silver Star Medal is the military’s third-highest personal decoration for valor in combat.

Sloan says many stories like Schmitt’s go untold, and that is why it was important to see this part of the story through. “I think Father Al would shy away from this, but I think from a family perspective and just from an historical perspective, I think it’s important for people to her the story and for people to understand that he could be an inspiration for others,” Sloan says. ” And I think that is what is important to the family — that the story is perpetuated — and that his influence is there and will continue to inspire others to do great things.”

There’s another chapter to the story of Father Schmitt that was also recently closed. His remains had been buried in a military cemetery in Hawaii for 75 years until they were finally identified using modern techniques and were returned to northeast Iowa for burial.

Sloan has been to Pearl Harbor and saw the place where Father Al made the choice to help others. “When I was there, I just tried to picture what it was like. And it was kind of awe inspiring to be quite honest,” Sloan says. “I’m just think what must have gone on. It seemed to still and peaceful when I was there. And to think what happened when those planes came over that hill — I can’t imagine.”

Sloan was on hand along with other family members today at Schmitt’s alma mater Loras College for the ceremony awarding the medal.