You are here: Home / Health / Medicine / Waukee organ donor’s image will be on Donate Life float in Rose Parade 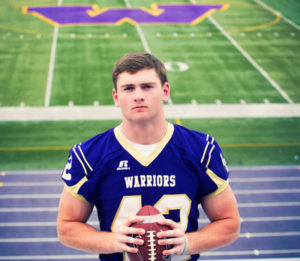 The face of a young central Iowa man who died almost two years ago will be featured on a Rose Parade float that’ll be seen by millions of people on New Year’s Day.

Eighteen-year-old Drew Lienemann of Waukee will be among some four-dozen organ donors who will be depicted on the Donate Life float during the popular holiday parade, according to Tony Hakes, spokesman for the Iowa Donor Network.

“He was a senior at Waukee High School before he passed away,” Hakes says. “He was an organ donor and was able to save, enhance or heal the lives of many. He was a remarkable young man, great athlete, great sense of humor, great family guy. We got involved with his family when he passed away and became a donor.”

Lienemann’s face will be recreated in what’s known as a florograph, an all-natural picture made from things like coffee grounds, sugar, sesame seeds, nutmeg and cloves. That florograph will be sent to the family here in Iowa this month.

Lienemann’s parents and two sisters will be making the trip from Waukee to California for the event. Hakes says it’s all an effort to raise awareness about the cause. “The Rose Parade is viewed by millions around the world and it’s a great opportunity to talk about organ and tissue donation and how people should register and why people should register as a donor,” Hakes says. “If someone doesn’t have a ‘Y’ on their driver’s license in the lower right hand corner next to ‘Donor,’ and they want to register before they renew their license, they can go to IowaDonorNetwork.org and sign up there.”

Lienemann took his own life in January of 2016 and his parents went public with what happened, holding a news conference in hopes of preventing further tragedies. They encouraged anyone struggling with thoughts of suicide to reach out for help immediately, saying, seeking help is not a sign of weakness, but a sign of strength.

The National Suicide Prevention Lifeline is 800-273-TALK (8255), or if you’re interested in organ donation, visit IowaDonorNetwork.org.