You are here: Home / News / Advisor: ‘professionalism at the capitol’ the goal of reform 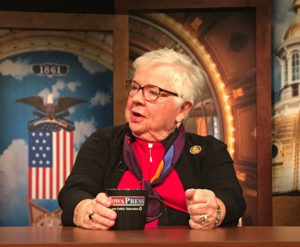 The retired human resources manager brought in by the Iowa Senate’s GOP leader to draft new rules of conduct for the legislature says she regrets not acting while she was a member of the senate.

Mary Kramer of West Des Moines served as a state senator for more than a decade and was president of the senate for two terms.

“I’m cross with myself a little bit that I did not institutionalize a human resources process at that time,” Kramer says. “…I just don’t know why that didn’t occur to me that it would have been helpful to do that.”

Kramer says she fielded complaints from staff about legislators and lobbyists during her years as a senate leader. Today, she’s drafting a policy for the entire legislature that sets up a process for filing complaints, investigating complaints and making founded complaints public.

“To me, it’s an opportunity to be sure that workplace has a safe place for people to report issues that they feel devalue them or disrespect them,” Kramer says.

Kramer is the former human resources manager for Wellmark, the state’s largest insurance company. She was brought in after a former Senate GOP staffer was awarded $1.75 million to settle her lawsuit over a toxic workplace.

“In a business world when you have a so-called ‘toxic culture,’ it’s not a productive culture, so it’s important to get it turned around so that it is a productive culture,” Kramer says. “I do think civility, respect, professionalism at the capitol needs to be a stated goal.”

Kramer will ask the Iowa Senate and House to pass a resolution outlining those goals. She’s also recommending a system be set up for reporting legislators, staff, lobbyists or members of the media who engage in questionable conduct. Kramer says while it’s ultimately up to voters to decide whether their legislators stay in office, voters need to be armed with information.

She will recommend making founded incidents of workplace misconduct public. That will be accomplished through referring documented complaints to the Ethics Committees in the House and Senate, according to Kramer.

Kramer resigned from the state senate in 2003 after then-President Bush nominated her to be U.S. Ambassador to the Eastern Caribbean. She made her comments today during taping of the “Iowa Press” program that airs tonight on Iowa Public Television.