You are here: Home / News / Major changes may be in store for 2020 Iowa Democratic Party Caucuses 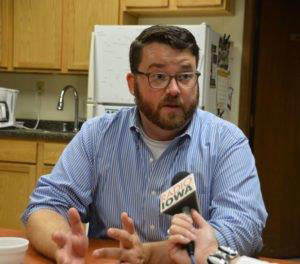 The so-called “Unity Commission” formed by the Democratic National Committee is recommending historic changes in the way Democrats conduct the Iowa Caucuses.

The Iowa Democratic Party would be required to let people who cannot attend the neighborhood meetings on Caucus Night cast their presidential preference vote.

“They gave us the recommendation that we need to come up with an absentee process, but did not give us the prescriptive way in how to do it. At the Iowa Democratic Party, we have the opportunity to take the time and figure out what process will work that will fit within the framework of our Iowa Caucuses,” said Iowa Democratic Party chairman Troy Price.

Party leaders had already been discussing the idea of creating a special precinct in each of Iowa’s 99 counties, as a way of collecting “absentee” Caucus votes.

The other major change Iowa Democrats may be forced to make to their Caucuses? Reporting raw vote totals for each presidential candidate. That’s how Iowa Republicans report their Caucus Night results, but Democrats have a different reporting process for each precinct. It disqualifies candidates who lack at least 15 percent support and then calculates how many delegates each candidate sends on to county meetings. Price said at this point, the party plans to continue that complicated process, even if forced to report a raw vote tally for all candidates as well.

The changes proposed by the Democratic Party’s national “Unity Commission” will be discussed when another national panel sets the 2020 presidential campaign schedule for voting in state-level contests. Caucuses conducted in 2016 in neighboring Nebraska and Wisconsin had an absentee process.