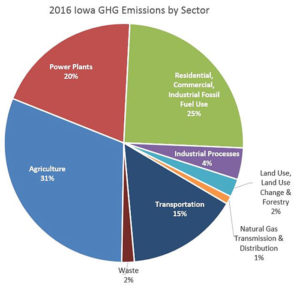 The annual report on greenhouse gases in Iowa shows the emissions of those gases has fallen for the second year in a row. DNR- senior environmental specialist, Marnie Stein, says statewide emissions decreased by 2 percent from 2015 levels.

She says emission levels have decreased as Iowa’s power source has changed. “Power plant emissions have decreased 40 percent from their peak in 2010, and the amount of wind generation of electricity in Iowa has increased from four percent in 2005 to up to 37 percent in 2016,” Stein explains, “while the amount of electricity generated in Iowa from coal has decreased from 78 percent to 47 percent.”

The power plant emissions decreased by 14 percent in the last year. “It’s a combination of some units switching from coal to natural gas and then some units not being run because there is enough wind in the state to provide electricity on some days,” Stein says.

The emissions from power plants were the only greenhouse gas source in the state to see a decline in this year’s report, and they offset the increases in other areas, which were about 5 percent. “The largest source of greenhouse emissions in Iowa are actually in agriculture –they are about 31 percent — and then power plants emit about 20 percent. And then fossil fuels used by homes, businesses and industries is about 25 percent, and then transportation is about 15 percent,” according to Stein.

Overall the report says the state let loose 128 million metric tons of greenhouse gases in 2016.”That’s the same amount of greenhouse gases that would come if you sent six million tons of garbage to the landfill instead of recycling it,” Stein says. “And another way to view it is it would take 151 million acres of trees to store the amount of carbon that was emitted last year.”

This is the 11th greenhouse gas inventory report that is mandated by the Iowa Legislature to document emissions trends and track progress in reducing emissions. Find the complete report on the DNR’s website.