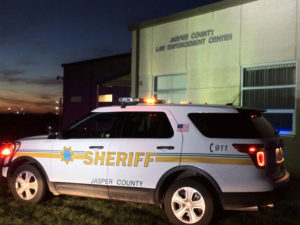 The Jasper County Sheriff’s Department is asking for the public’s help in identifying who’s responsible for opening some fire hydrants in Reasnor and near Prairie City that led to the loss of thousands of gallons of water.

Sheriff John Halferty says someone tampered with four fire hydrants, and although there were fires in both Sulley Saturday at 11 p.m., and in Prarie City at 1:30 Sunday morning — he doesn’t think the fire and tampering are related.

He says they believe the water sources were tampered with during the same time frame as the fires, but he says the two things appear to be a coincidence. Three of the opened hydrants were in Reasnor, and one hydrant was near the Central Iowa Water Association Water Tower east of Prairie City. Central Iowa Water Association estimates approximately 300,000 gallons of water was lost due to the tampering. Sheriff Halferty also notes one of the tampered with hydrants was damaged and unusable.

“Because a hydrant wrench was not used, I suspect that’s why the one hydrant in Reasnor was damaged. You can break the part of the hydrant that actually opens up the water flow, and I believe what happened to the hydrant in Reasnor,” Halferty says. The Sheriff says the hydrant openings did not impact the water supply of local fire departments during the two structure fires. But he said it did create a dangerous situation if the water had been needed.

“It’s extremely dangerous, number one the fire departments usually have preplanning in place and know what water sources they are going to go to,” Halferty explains. “An if they arrive and they are not able to utilize that or it has been tampered with and they have to go to a backup plan…it delays their ability to fight the fire and protect not only the citizens, but their property as well.” Anyone with information pertaining to the person or persons responsible for tampering with these fire hydrants is asked to contact the sheriff’s office at 641-792-5912.