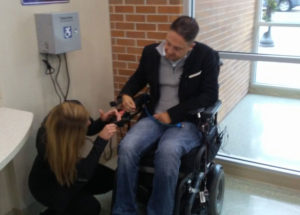 Sioux City is the first city in the state to install a wheelchair charging station. Angela Drent of Siouxland District Health says the station to power up electric motor wheelchairs in the city’s downtown, at the Martin Luther King Ground Transportation Center.

“This wheelchair charging station is equipped with a standard power outlet and a 24-volt, 5-amp charger,” she says, “that really allows people who use wheelchairs or scooters an opportunity to get a full charge at a location other than their home.”

Alex Watters, a member of the city council in Sioux City, is wheelchair bound. Watters says he’s proud his city is one of the first in the country to have a public charging station.

“For me, it’s really a testament to our city for the desire to be more inclusive and encourage those that use power wheelchairs or scooters to get out and about and not be afraid to lose charge,” Watter says. “I know that it’s happened to me before. I’ve been out and about on the trail system, driving across town and worried about wheelchair dying or not being able to get home.”

Watters says it takes about 30 minutes for a motorized scooter or wheelchair to get fully-charged at the new station. The Centers for Disease Control provided a grant to Sioux City and nine other communities across the country for the project.