You are here: Home / Fires/Accidents/Disasters / Start to second fireworks season not quite as hectic as the first season 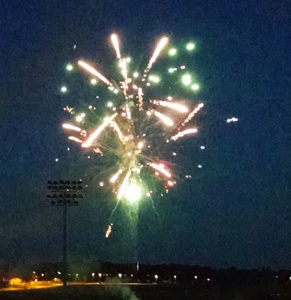 The second period for selling fireworks in the state started Sunday and will run through January third. A variety of retailers opened shops and many set up multiple temporary locations to take advantage of the first sales period that started in June and ran through July 8th.

State Fire Marshal, Dan Wood, says one change cuts out the vendors who set up temporary locations this summer. “This season the only places that can sell fireworks are the permanent locations, meaning the permanent buildings — so no tents are allowed during the sales period,” Wood says. He says those vendors who got a license to sell during the summer period can also sell now.

Wood says there is no extra fee for this season and says the only issue would be if they made any changes to their businesses, as they would have to resubmit their site plans. If there are no sit changes, they can open up and sell fireworks. Wood says they did have several large stores that got exemptions to set up small displays to sell within their stores, but it doesn’t look like many will be doing that this time.

“So if you take the exempt amount ones out and you just go with the true permanent stand-alone ones — we had 30 some in the June-July period — and for this sales period here in December and January, we have around 20 that we know of right now,” according to Wood. The summer period was the first time fireworks sales had been legal in the state since 1938 and there was a scramble to get everyone licensed and the rules in place. Wood is enjoying a little calmer sales period this time around.

He describes it as “a bit less hectic,” and says while they’ve had a few new plans submitted, they are just our trying to get all the retail locations inspected. The law allows city councils and county boards of supervisors to ban or restrict use of fireworks, but not their sale. The second season is designed to allow you to use fireworks to celebrate the New Year. Wood doesn’t know how many people will want to be out in the cold using fireworks.

“We really don’t. We just ask people to do it in a safe manner just like they did in June and July — we still had some incidents — but we just ask everybody to do it safely,” Wood says.

Many cities put restrictions on when the fireworks could be shot off in the summer period and are doing the same this time around. Some cities revisited the restrictions after finding many people ignored them or didn’t follow the restrictions.