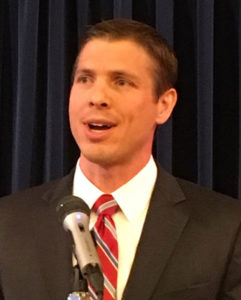 A coalition of large Iowa businesses with a quarter of a million employees is promising to offer 30,000 internships and apprenticeships for students as well as “externships” for teachers by 2025.

“Over 5100 jobs are currently open in our IBC member companies,” McLean said. “The estimated annual (salaries) for all of these roles? About $228 million, so we can imagine the economic multiplier that filling those roles with Iowans that have the skills would make a great impact both, obviously, for our businesses but for the state as well.”

McLean, who spoke at the governor’s weekly news conference, said Iowa Business Council members already offer a “significant” number of internships, apprenticeships and “externships,” but he suggested getting to a total of 30,000 is a “good amount of growth.”

“The digital era is here,” Houston said. “It is threatening our way of life here and either we get on board, have the apprenticeships and the sorts of programs that would encourage employees to come work for our companies or they will go to Illinois, they will go to Texas and Florida and all the other states.”

Mary Vermeer Andringa, CEO of Vermeer Corporation in Pella, said manufacturers have been talking about the lack of skilled workers “for quite some time.”

“It’s not my dad’s manufacturing,” said Andringa, who’s leading the company her father founded. “We have technology in virtually everything, so when you talk about STEM — science, technology, engineering and math — it’s all about that.”