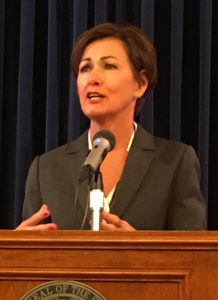 King tweeted that “diversity is not our strength,” but “assimilation” is. King’s commentary drew more than 20,000 retweets and comments on Twitter. The chairman of the Iowa Republican Party chimed in Sunday, tweeting a quote from Ronald Reagan about the contributions “magnificent diversity” make to the country. Reynolds told reporters today she “completely” disagrees with what King said.

“I believe that diversity has made this state and this country stronger and so I completely disagree with what he said,” Reynolds said during her weekly news conference.

But Reynolds has no intention of kicking King out of his role as a co-chair of her 2018 reelection campaign.

“I have a lot co-chairs that have signed up to participate in our campaign. I am so proud to have Senator Grassley and Senator Ernst and Congressman Blum as well as a host of individuals across this state. I’m not going to agree with everything that they have to say and I can certainly make it known when I don’t agree with a comment that they made,” Reynolds said, rapping the lectern with her hand to emphasize that last phase, “but I also want to be able to work with them on really important issues for Iowans.”

Reynolds said her priority is helping Iowa workers, including those in “ethnic communities,” gain new skills so they can fill that thousands of jobs that are unfilled in Iowa today.

“That’s what I’m focused on. I am not going to get sidetracked with a comment that I disagree with. I’ve made that clear,” Reynolds told reporters, before adding emphatically: “I disagree with what he said.”

Reynolds added that she has 3500 other campaign co-chairs at this point.

On Saturday, King retweeted a quote from Hungary’s prime minister, who said: “Mixing cultures will not lead to a higher quality of life, but a lower one.” King then added that “assimilation, not diversity, is our American strength.” King’s comment drew hundreds of negative responses on twitter.