You are here: Home / Fires/Accidents/Disasters / First snow in Dubuque led to lots of accidents 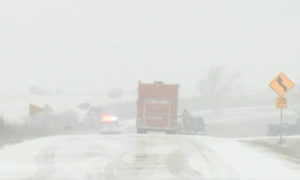 The first snowfall of the season across sections of eastern Iowa this week resulted in an unusual spike in car crashes in Dubuque.

Police say, over a six-hour span on Monday, they responded to 63 crashes. Just a little more than an inch of snow fell in Dubuque while temperatures were right around freezing. Dubuque Police Lieutenant Scott Baxter told KCRG-TV it appears many drivers failed to alter their approach despite the slick roads.

“We see that a lot with people especially when they have four-wheel drive, or all wheel drive, front wheel drive, sometimes they get a little bit overconfident,” Baxter said. “[Drivers are] not realizing that on ice or similar conditions, it’s of little value to you. It’s still going to be difficult to maintain control and traction.”

The 63 crashes on Monday compare to just 18 crashes in Dubuque during the first snowfall last year and 21 crashes in 2015. Both of those first snowfalls involved over five inches of snow. Across Iowa today, motorists driving high-profile vehicles are being warned about strong wind gusts of up to 50 miles-an-hour. A wind advisory is posted for nearly the entire state.