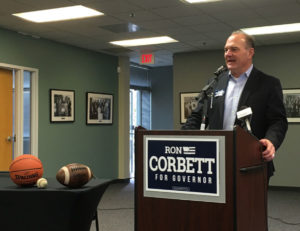 The move, though, depends on a pending U.S. Supreme Court opinion.

“By most of the legal analysis…it looks like the court will rule in favor of states,” Corbett said, “and that will present an option or an opportunity for the State of Iowa to get into sports betting.”

Corbett’s preference would be for the Iowa Lottery to manage the bets on professional baseball, football, basketball games as well as college football and basketball, but Corbett said during a news conference that he’s open to the idea of having the state-licensed casinos do it. Corbett is buying $10,000 in internet ads to tout his campaign’s online survey on this topic.

“We’re going to ask people over the next several weeks as they’re checking the bowl scores or their favorite sports team to take the survey,” Corbett said. “The first question in the survey is: Should Iowa legalize sports betting?”

The second question is: Should the Iowa Lottery or the casinos manage it? Whether the new tax revenue should be used on mental health or something else is the third question. Corbett cites an estimate indicating the state could collect $24 million in new gambling taxes for the system each year if the Lottery ran “sports book.”

“I think that’s a very significant sum of money and will begin this process of providing the resources to help solve the mental health crisis,” Corbett said.

Corbett told reporters he’s the first of any of the dozen or so candidates for governor who’ve proposed a way to pay for expanding access to mental health services in Iowa. He also rejected the idea it’s a risky political move for a Republican candidate “to talk about gambling” during the campaign. Corbett pointed to Republican Governor Terry Branstad, who signed into law most every form of legalized gambling currently available in Iowa — from the lottery to casino slot machines.

According to Corbett, Iowa Lottery retailers would be able to take sports bets from customers because the process is similar to buying a lottery ticket.

“They stand in, sometimes it’s a line, depending on the jackpot but they pull their Lottery card off and they fill in the numbers like a Keno game, so they’re certainly equipped and set up to provide this service to the State of Iowa,” Corbett said.

Corbett is challenging Republican Governor Kim Reynolds’ bid for a full, four-year term as governor. No word yet from the Reynolds campaign about her stand on legalized sports betting.