You are here: Home / News / January 9 the target date for release of governor’s tax plan 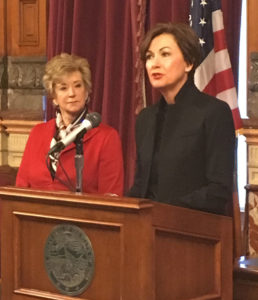 Governor Kim Reynolds aims to reveal details of her tax plan when she delivers the annual “Condition of the State” message to legislators on January 9, 2018.

The Republican governor, though, has been waiting for Republicans in congress to pass their tax plan.

“What happens at the federal level will have a big impact on what we’re able to do at the state level and so we’re watching very closely,” Reynolds said this morning. “We’re encouraging them to get something done in a timely manner. I’m cautiously optimistic. It seems like there’s great movement, not a lot of differences…It would be great if they were able to get something done next week.”

Earlier this month, Reynolds said her overall goal is to simplify and reduce state income taxes.

Reynolds hosted Linda McMahon, the administrator of the U.S. Small Business Administration, in her Des Moines office this morning. McMahon said there are no “definitive answers yet” on what the GOP’s federal tax package will look like.

“I really do support what the president has been saying for the past week or so and that is in his view we now have the bill that was passed by the House and the bill that was passed by the Senate and his exact words are: ‘Now, we’ve like put it all in a mixer,'” McMahon said. “And it’s getting mixed up and we’re going to be able to pull out the parts that are going to be even better than what either the House or the Senate’s bill is and that’s what I’m expecting to see.”

This afternoon, President Trump will make a statement from the White House about the pending tax deal. A family from Johnston, Iowa, has been invited to be in the audience.