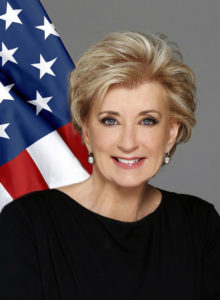 The woman President Trump nominated to advocate on behalf of America’s 30 million small businesses will be in Iowa today, meeting with Governor Kim Reynolds and visiting merchants in central Iowa.

Linda McMahon, administrator of the U.S. Small Business Administration, says she’s focused on having meaningful conversations with small business owners in Iowa and across the country.

“They’re talking about tax cuts because they really would like to invest more in their business, more in their employees,” McMahon says. “They’re looking for health care reform, they’re looking for workforce development because more and more, I hear about businesses needing more people in the workforce to fulfill the jobs that they have.” McMahon was confirmed by the U.S. Senate in February and has since toured more than two dozen states, with the goal of visiting all 68 SBA districts nationwide. Iowa marks her 26th state visit.

“I’ve made it a mission that that’s what I’m going to do,” McMahon says. “I’ve mentioned this to the president as well. I said, ‘If you want to know what small business are thinking, ask them.’ So, I’ve sat with over 450 business owners at the small business round tables that I hold and I tour small businesses.” McMahon is scheduled to visit two small businesses in central Iowa today: International Veterinary Supplies in Urbandale and Chocolaterie Stam in Des Moines. Despite efforts of the SBA to help start-ups succeed, McMahon says one of the primary reasons so many small businesses fail within the first few years is what she calls “undercapitalization.”

“They go into a business, they’re planning on X amount of revenue and when that falls short, they haven’t planned for their cash flow management as well as they should,” McMahon says. “The start-up is a little bit easier than the continuity of business, continuing to create those markets or products and services and marketing them.”

“When you can reduce the tax rate across the board, when you can help not only the pass-through rates by the brackets being changed, the deduction being doubled,” McMahon says, “you are really looking to help those small businesses.” In recent years, McMahon ran for U.S. Senate twice in Connecticut as a Republican and lost both times to Democrats.

The 69-year-old North Carolina native is perhaps best known as the former president and later CEO of the World Wrestling Federation/Entertainment. She and her husband helped to grow the WWE from a small regional business into a large multinational corporation.