You are here: Home / News / Year end holiday travel expected to be highest ever 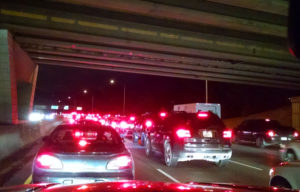 Iowans who don’t have travel plans over the next few weeks are in the minority. AAA is predicting record travel, both in Iowa and nationwide, for the upcoming Christmas and New Year’s holidays.

Gail Weinholzer , at AAA-Iowa, says more than 107 million Americans will be traveling at least 50 miles from home between December 23rd and January 1st.

“There’s going to be a lot of people traveling and there’s been a lot people traveling all year,” Weinholzer says. “We’ve seen year-over-year increases for every major holiday this year, Memorial Day, Independence Day, Thanksgiving and now Christmas/New Year’s. Clearly, Americans are traveling in robust numbers and we expect that to continue into 2018.”

This will be the highest year-end travel volume on record and 2017 marks the ninth consecutive year of rising year-end travel. Iowa’s interstates and highways will be busy, so Weinholzer says to plan accordingly.

“Actually, we are seeing increases across the board, personal automobiles, planes, trains, buses, everything,” Weinholzer says. “We’re seeing a significant increase and overall, the increase is 3.1% over last year.” Winter officially arrives next Thursday, the 21st, but Iowa’s already had a few minor bouts with wintery weather in recent weeks. Still, Weinholzer says most Iowans don’t let a little ice or snow get in the way of their vacation plans.

“When it comes to something like the Christmas/New Year’s holiday, weather does tend to have a little bit of an impact as far as causing people to leave perhaps a day earlier or a day later, but it rarely cancels travel plans,” Weinholzer says. “People are pretty committed to visiting family and friends.” Higher gasoline prices won’t keep people home either.

The average price for a gallon of gas in Iowa is $2.42, about three cents below the national average and 23-cents higher than a year ago. Iowa City has the state’s most expensive gas at $2.47 a gallon while Council Bluffs is the cheapest at $2.36.