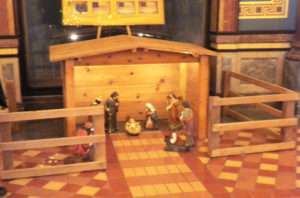 A nativity scene is on display in the rotunda of the Iowa State Capitol again this year.

The Thomas Moore Society funds the nativity scene that was first set up in the State Capitol last year. Martin Cannon is the spokesman for the group.

“It’s a simple thing, it’s a beautiful thing, it’s a quite thing, and we’re very pleased to do it,” Cannon says. Governor Kim Reynolds was on hand and made some comments after the nativity scene was set up.

“The Christmas season is a special time of year and it’s a pleasure to have the nativity shown in our beautiful capitol,”Reynolds says. “We’re a country that resects all faiths and traditions and this month we honor the faith of Christians by celebrating the birth of Jesus Christ. I want to thank the Thomas Moore Society for sponsoring the placement of this nativity scene.” Cannon says he doesn’t get a lot of feedback on the nativity scene. 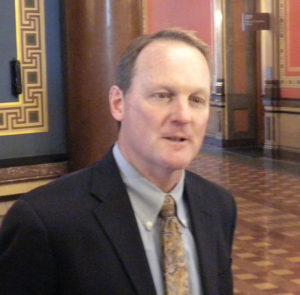 “People are a little befuddled at first because it is unusual — and of course it shouldn’t be unusual. The questions that arise about the propriety of such a thing in the public space are easily resolved and very well settled. It’s really not a difficult issue,” Cannon explains. He says the nativity scene is not sponsored by the State of Iowa and his group simply asks for display space like any other group.

Cannon says the goal is to share their message.”We hope that this just becomes an annual celebration of Christmas, not an annual argument over the propriety of having it here, ” he says. 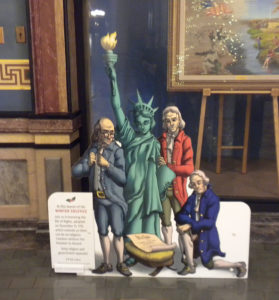 The Atheist display at the capitol.

He points out there is a display put up by atheists right across the rotunda that shares on equal footing with the nativity scene. And he says his group has not issue with that display.

“It’s a demonstration really that this is open to all beliefs,” Cannon says. The Thomas Moore Society works with the group the American Nativity Scene and Cannon says they have placed nativity scenes in a total of 40 state capitols across the country.

The nativity scene can be viewed during the normal operating hours of the Iowa State Capitol.