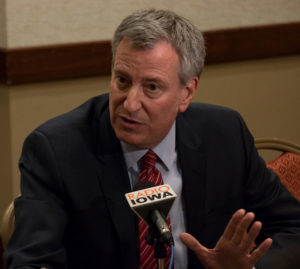 New York City Mayor Bill de Blasio celebrated recent Democratic Party victories around the country with a crowd of Iowans tonight and he predicted the country was “at the beginning of a progressive era.”

“Change can happen anywhere and it most certainly can happen here in Iowa,” de Blasio said, to cheers and applause.

De Blasio spoke at a fundraiser for Progress Iowa, a group that hosted independent Senator Bernie Sanders in December of 2014, more than a year before Sanders launched his presidential campaign.

De Blasio told a group of reporters his visit to Des Moines was part of a push to get the Democratic Party to address its “identity crisis.”

“This is about beginning at the beginning,” de Blasio said during a late afternoon news conference. “If we’re going to change the country, we need progressive movements to come to the fore. If we’re going to make the Democratic Party competitive everywhere, it will be because there is a progressive economic message and a populist approach.”

De Blasio was just reelected to a second, four-year term as New York City’s mayor and de Blasio told reporters he was not running for president. 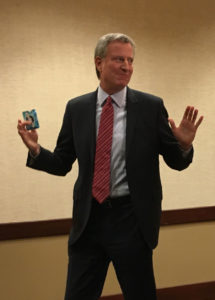 “But I can walk and chew gum at the same time,” de Blasio said. “I can do my job as mayor of the city and still work on my core beliefs, work to advance causes I believe in that I also believe are fundamentally good for New York City and for the whole country.”

A few minutes later, de Blasio offered a “visual” demonstration. He took a pack of gum from his pocket, popped a piece in his mouth, chewing as he rose from his chair and walked out of the room.

A couple of hours later, de Blasio told the crowd of Democrats that “prairie populism” can flourish in Iowa again if the party pushes that message to all, including those who were “bamboozled” into voting for Donald Trump.

“I don’t want us hung up by who people voted for last time,” de Blasio said. “All I care about is who they’re going to vote for next time.”

About a dozen New York City Police Officers protested on the sidewalk outside the event hall, occasionally chanting “shame” to protest de Blasio’s relationship with their union.