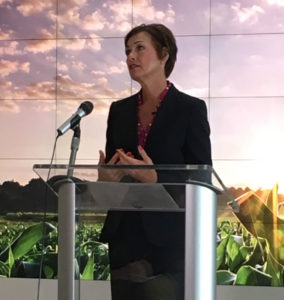 Iowa’s governor says she told top officials in the Trump Administration “it would be devastating” for Midwest farmers and the ag economy if the North American Free Trade Agreement is abandoned.

“It was a healthy discussion. We continued to talk about the opportunities for modernizing, but not pulling out,” Governor Kim Reynolds said late this morning.

Reynolds flew to Washington late last week to meet with Vice President Mike Pence and the secretaries of agriculture and commerce. Earlier this year, Commerce Secretary Wilbur Ross suggested farm groups and agribusinesses were exaggerating the impact of ending NAFTA. Reynolds told reporters today that she directly addressed Ross during last Thursday’s meeting and made the case on behalf of farmers.

“There’s a lot of angst out there…Their incomes have been diminished. They’re struggling,” Reynolds said. “…I just indicated to him that they’re feeling the pressure and they’re concerned and if you think they’re going to stand down and just let this be a negotiating tactic, they’re not. You’re going to hear from me and you’re going to hear from Iowa farmers about the impact that this would have on the ag economy not only in Iowa but in the Midwest and across this country and it’s serious and so I don’t think we can say that enough.”

Three other Republican governors were part of the meeting with the vice president and cabinet secretaries.

The latest round of NAFTA negotiations among representatives from the U.S., Canada and Mexico wrapped up last Friday. Negotiators have finalized only two of the expected 30 chapters in the new NAFTA deal. The next round of talks is set to begin in Toronto in late January.

Reynolds made her comments during a news conference at DuPont Pioneer in Johnston.