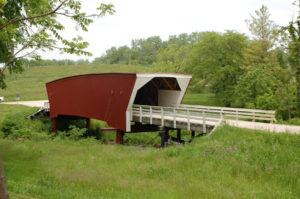 The Cedar Bridge before the fire.

The effort to rebuild the centerpiece covered bridge in Madison County is getting a big boost with the awarding of a nearly $276,000 state grant through the Iowa “Great Places” program.

The Cedar Covered Bridge which was featured on the cover of the best-selling Robert Waller’s novel, “The Bridges of Madison County” was destroyed by arsonists on April 15th. Madison County Chamber of Commerce director Heather Riley says the grant helps them move ahead.

She says the entire project to take down the remains of the burned out bridge and replace it will cost around $600,000. “Now it’s going to be a similar replica to that that was burned with a few differences — the biggest one being that the tresses will be made of steel this time versus wood,” Riley says. The bridge that burned in April had replaced the original bridge that was also destroyed by arson. Riley says since they are replacing a replica, they can use a different material this time.

“We feel like now that we have had two arson incidents with that same bridge we need to do something differently,” Riley says, “so, that’s why this rebuilt bridge will have steel tresses versus the wooden ones.” And she says the steel trusses will lower the cost of the rebuild. Riley says they had around $230,000 raised when the wrote up the grant proposal.

“And then after we’d submitted the application we had another donation of $15,000 — so we are just a little over 250, plus the 275 coming from Great Places — so, we are doing pretty well,” she says. “We still have more fundraising to do her locally, but this is an enormous shot in the arm.” There was some discussion about whether the cost to rebuild the bridge a second time was too much. Riley says the outpouring of support has shown it’s the right thing to do.

“We took donations from across the country around the world, online or from people who were here to visit this summer and just felt awful about what happened and dropped a ten or a 20 in our donation bucket,” according to Riley. “We raised a lot of money Covered Bridge Festival weekend, and the weekend prior to that we held a big community fundraiser and had a presence out at the Cedar Bridge and we filled a ten-gallon bucket with cash. So, there is strong support to rebuild this bridge.”

Three people, between the ages of 17 and 19, were arrested and charged with setting the Cedar Bridge on fire. A woman has pleaded guilty and restitution is part of her sentence. Riley says the county prosecutor will push for restitution in all cases involving the arson, but says it’s not a certainty that they will see any funds.

“We just can’t place our hopes on getting that money back even though we all know that would be the right thing to do — you know the right thing to do would have been to leave Cedar Bridge alone — so I guess I’m just no hopeful that we’ll see much. Right or wrong, that’s just kind of the way that I see it,” Riley says.

The bridges are a major attraction for the area and Riley says they want to return it as soon as they can. “Rather than wait on those kids to pay the money back, we’d like to have our bridge back so we can continue having celebrations and happy times out there as a community,” Riley says.

Riley says with the grant and the other fundraising in place, they can begin getting the detailed designs and permits they need to begin rebuilding as soon as the weather allows.

Photo courtesy of the Madison County Chamber of Commerce.