You are here: Home / News / Freezing rain and snow in the forecast 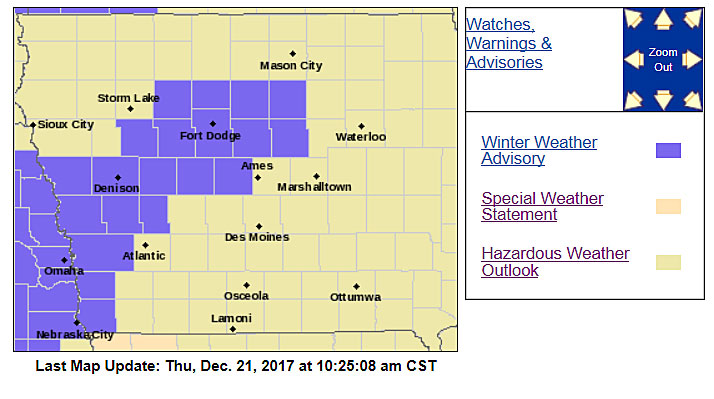 Today is the first official day of winter and it’s beginning to feel like it across Iowa.

“As far as tonight and tomorrow morning, you’re looking at more freezing precipitation into this evening. Tomorrow looks to be dry with temperatures getting colder,” Fillbach said. Some slick roads are possible, especially on overpasses and bridges. The snow over northern Iowa likely won’t amount to much.

“The snowfall amounts should be on the light side, an inch or less,” Fillbach said. “The heavier stuff will stay up north of Iowa.” Sections of southern Minnesota could get up to three inches of snow today. People traveling through Iowa this weekend could face another hazard.

“Weather-wise, the biggest concern for Christmas travel is going to be the temperatures,” Fillbach said. “Temperatures are going to be considerably cooler, with lows in the single digits.” High temperatures in Iowa Saturday and Sunday will be in the 20s to low 30s. The forecast for Christmas day includes a chance of light snow with morning lows near zero in northern Iowa to the mid-teens south. Afternoon highs should range from 10 to 30 degrees.